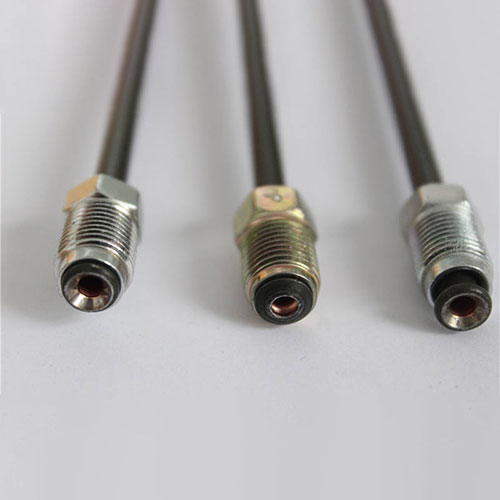 
Send email to us

Free length
The length of the exposed part of the hose between the two pipe joints on the hose assembly in a straight state.
Brake hose connector
In addition to the clamp, a connecting piece attached to the end of the brake hose.
Permanently connected pipe joints
The connected pipe joints shall be assembled by crushing or cold extrusion deformation, or the pipe joints of damaged bushings and ferrules shall be replaced every time the hose is reassembled.
burst
A fault that causes the brake hose to be separated from the pipe joint or leaks.
Vacuum piping connector
Refers to a flexible vacuum transmission conduit:
a) It is a connector between metal pipes in the brake system;
b) No pipe joints are required during installation;
c) When assembling, its unsupported length is less than the total length of the part that contains the metal pipe.
Test conditions
1) The hose assembly used for the test should be new and should be aged for at least 24 hours. Keep the hose assembly at a temperature of 15-32°C for at least 4 hours before the test;
2) For the hose assembly for flexural fatigue test and low temperature resistance test, all accessories, such as steel wire sheath, rubber sheath, etc. must be removed before being installed on the test equipment.
3) Except for high temperature resistance test, low temperature resistance test, ozone test, and hose joint corrosion resistance test, other tests must be carried out at a room temperature of 15-32 °C.

Write your message here and send it to us